First, a little history: The woman who lived in our house before we bought it had lived in it for about 40 years before she died. Her children do not live nearby and were not interested in keeping the house. They put it up for sale at a time when houses glutted the market and nothing was moving. And after having it on the market for 18 months, they dropped the price significantly just as we started looking. (This is one of many Strokes of Luck that appeared throughout the process of buying the house.)

Pepper Morrison, the former owner, was 87 when she died, but for several years prior to that, she had been unable to navigate the very steep, narrow stairs to the bedrooms upstairs. So she turned the living room into her bedroom. It gave her first-floor accommodations, a first-floor bathroom, and the ability to avoid many stairs.

By the time we saw it, most of the furniture such as the hospital bed had been removed. What we saw was a large carpeted room with very fussy wallpaper and a drop-dead gorgeous fireplace (ignore the bric-a-brac.): 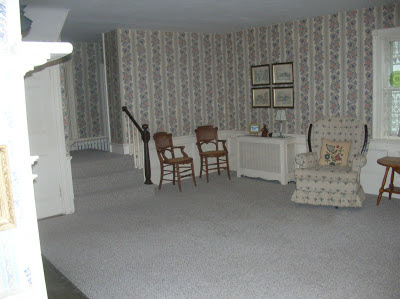 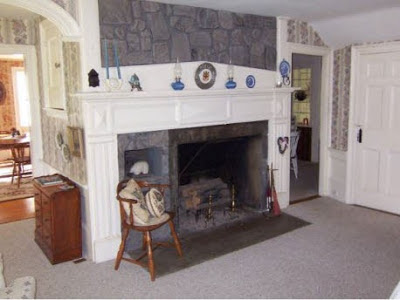 Our first task was to remove the carpet and hopefully uncover wide-plank pine floors such as we found in most of the rest of the house. 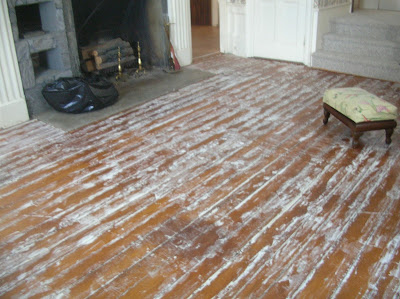 Unfortunately, we found what you see above. Floors that were in severe need of refinishing. The white stuff is apparently some sort of wood filler that was once thought to keep out drafts. I don't know why there would be many drafts from the basement under the carpet, but someone thought he was doing the right thing.

So we refinished the floors, acquired a couple oriental rugs in Little Rock as part of a house sale and had them shipped to Bennington, brought some of our furniture with us, scavenged among the furniture we purchased from the Morrison estate (more about that on the Dining Room page), painted the blue floral stripes a toasted almond color, and hung paintings we brought from Little Rock. Now you can see a room we love to sit in. 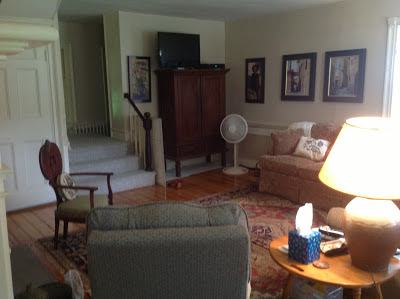 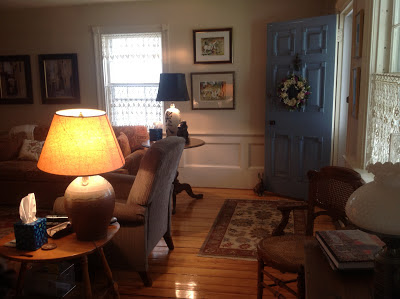 Please notice the lovely woodwork created by the builder/joiner, Hiram Waters. Raised panel wainscoting, beautiful carving on the fireplace mantle. A lovely, elegant room. And our hope is that we have allowed you to see its beauty rather than be distracted by too much pattern. 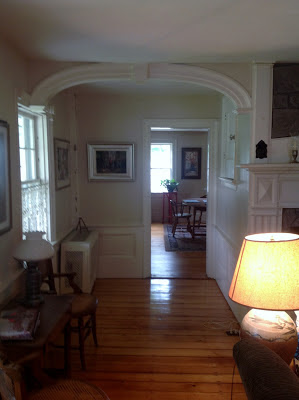 One of our big disappointments was that the fireplace was unusable without tearing out the central part of the house to rebuild the large chimney. Interior deterioration made it impossible even to line the chimney with a large enough pipe to provide ample venting for even gas logs.

We debated about doing nothing, putting in a gas insert that would have hidden most of the firebox, or getting a small gas stove that looks like the old-fashioned woodstove used in the 1850s.

We opted for the latter and in mid-November we got our stove installed. Megan and Molly love it. 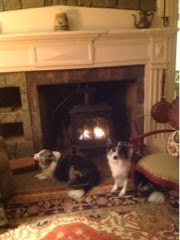